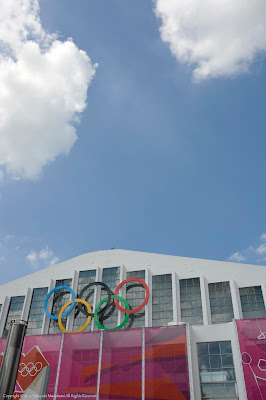 It's been almost two weeks since I started to try to get a ticket for individual final but, time has passed without any result for the particular day. During my attempts, I managed to get a ticket for group final as I wrote before. Because of this, I was refraining from buying any types of tickets except for the individual final as every ticket and train fare costs a lot and of course I thought watching just qualifications was pointless for me. But, in this case I can not watch any individual competitions live despite I'm living in the host country and of course I can get to the venue with in two hours. Then I decided to buy a ticket for qualification day 1 and made it. 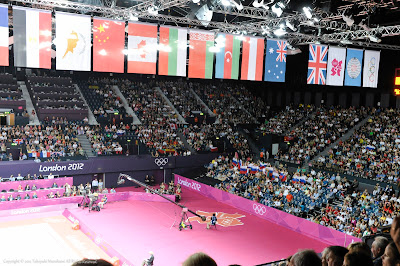 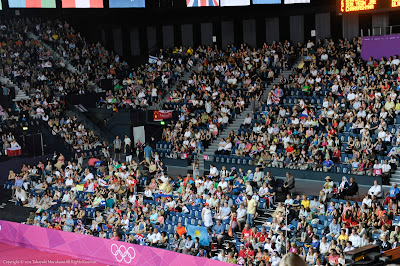 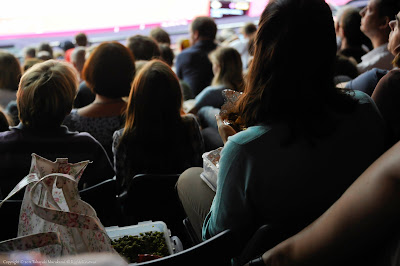 £24 for day travel card and £95 for the match. I don't want to convert this into Japanese Yen.
Firstly, I noticed that my allocated seat was awful as it was above 1st floor, too far from the mat. The degree of the spectator seats are steep therefore it's easy to watch the performances but, seemed too small as well. In terms of photographing, it was not suitable at all. Before the competitions begins, I came across a photographer Tom inside of the venue and he was trying to swap his seat to better one. According to him, he made it and got a seat on the floor level, very close to gymnasts performing. I should have followed his way but, my aim and priority were not to photograph but to cheer gymnasts so I chose a sort of compromise.

Secondly, as I expected there were lots of empty seats as images indicate. In spite of this situation, to get an official ticket online is extremely hard. I was able to find many seats for official photographers which were not used, and also numbers of booked ones (perhaps for sponsors). This was an exactly the same phenomenon when I've watched volleyball games about a week ago.

Thirdly, many spectators were late for the commencement of the match. Consequently, the late spectators come and take seats during the competition which was simply destructive. Moreover, one of them started eating at the seat. Eating itself is not prohibited but,  again as the image points out, she occupies an empty seat next to her and enjoys sort of picnic. It smelled considerably, probably curry or something spicy stuff. Above all, the spectators were unsophisticated in terms of watching a sport. Because they don't know much about what rhythmic gymnastics is. Most of the crowds were Union Jack holders, in other words British which means they are not real rhythmic gymnastics fans. Certainly, the atmosphere at the venue was different to regular competitions but, I supposed this is a different way.

Anyway, show must go on as follows. 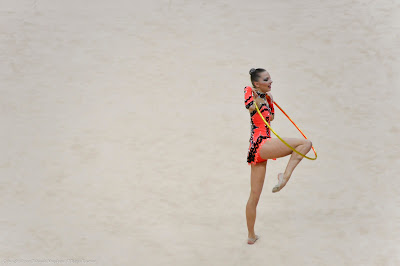 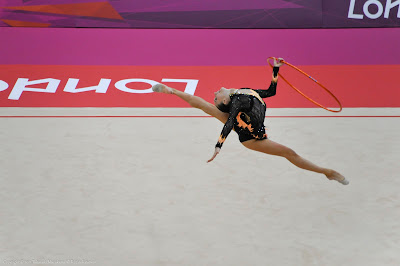 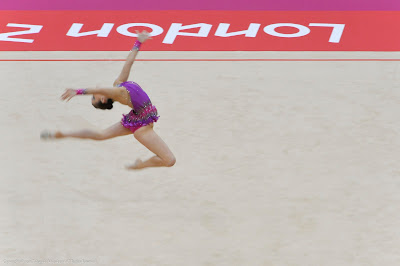 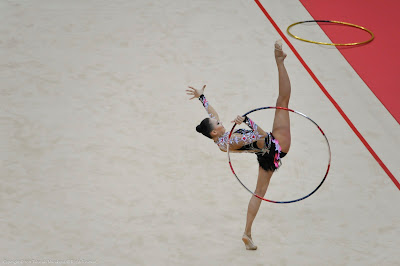 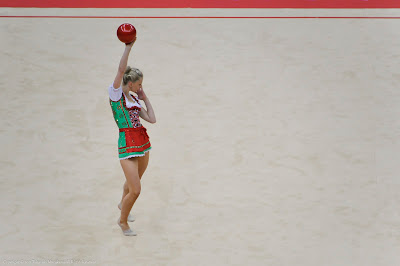 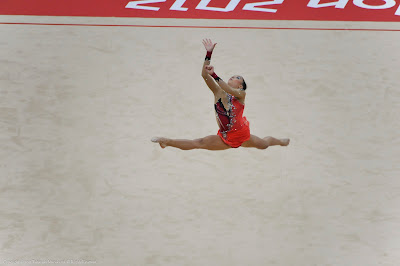 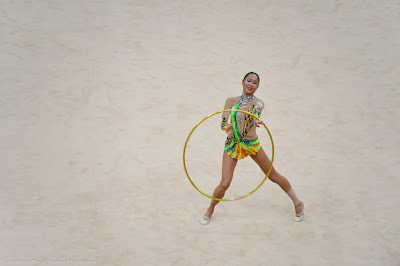 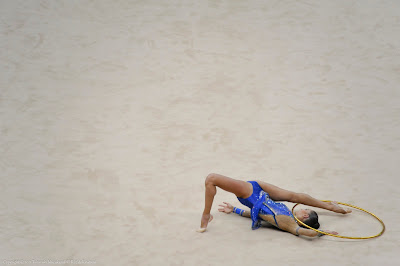 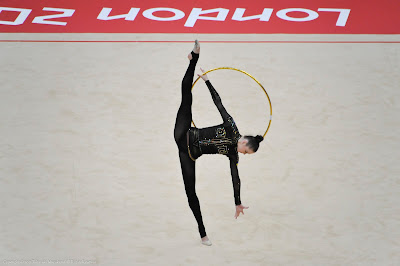 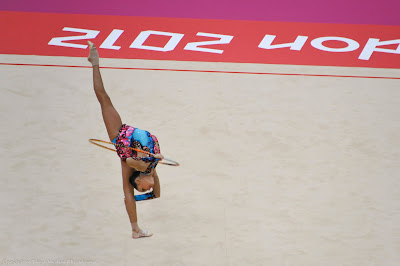 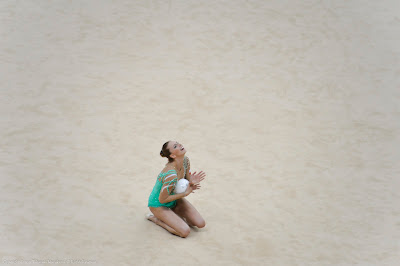 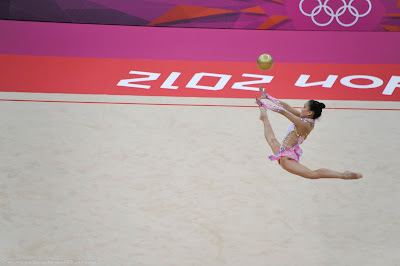 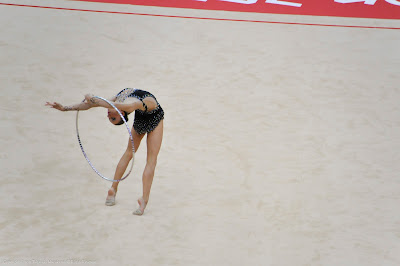 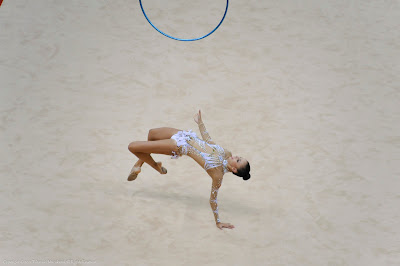 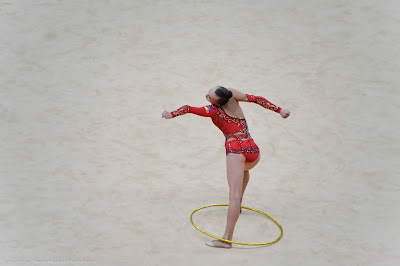 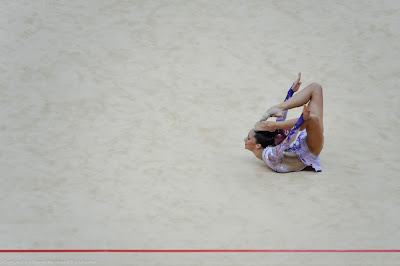 Only Hoop and ball took place for the day 1. Probably, every gymnast had certain amount of tension and due to this their performances were quite stable. I didn't see big mistakes, which was good. However, as I mentioned earlier it was too much distanced from my seat. Not to mention, I took my Belarusian flag with me and waved it from my seat. I was not quite sure if Luba was able to recognise it but, I suppose I was a sole person who waved Belarusian flag. Maybe flilmed by BBC.

Another thing I regarded was that many of gymnast's leo were renewed. This should mean that the Olympics is something special for gymnasts. 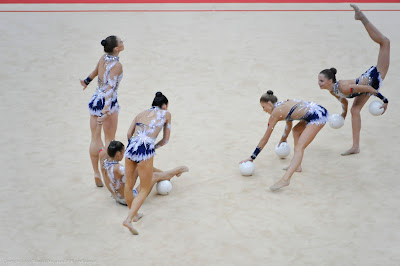 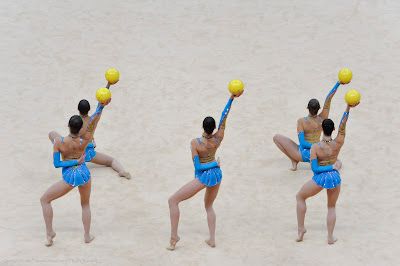 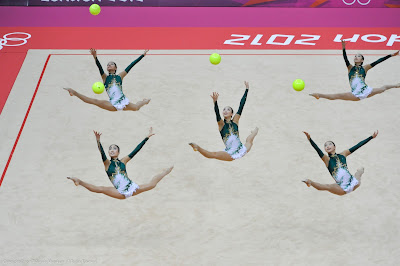 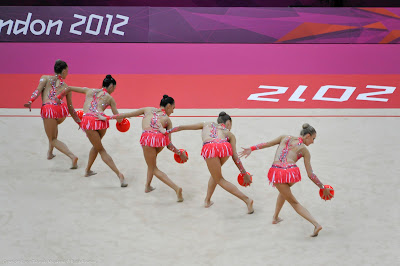 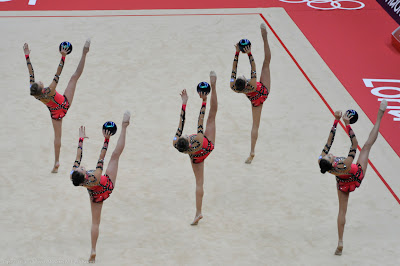 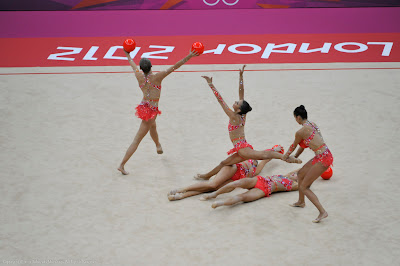 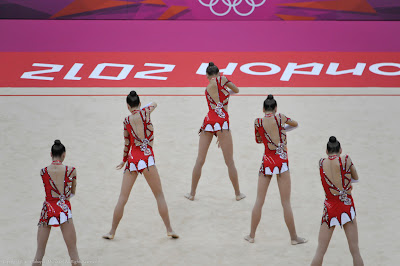 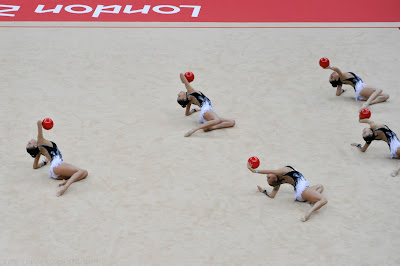 At the group competition, I waved a Japanese flag which I was supposed to use at the volleyball match and also an Italian one which I purchased for volleyball as well. Not only waving but also I shout to cheer team Japan in Japanese. Although this was my first experiences, it was not too bad. Perhaps this is because there were not so many Japanese supporters which makes me much more proud.

When it comes to performance by British team, crowds made massive noise even though they are not familiar with this particular sport ( I assume that they just want to be excited). And it seemed to me childish as usual.
And I'm not sure if every competition I've ever seen has done same thing but, there was a commentary at the venue and she commented something about the last performance. To me it was annoying because obviously it was for the crowds who don't know about rhythmic gymnastics. And basically, she can't criticise gymnast's performance since they might listen to the comments. Eventually every comment have to be positive which should not necessarily required although I hardly listened to it.

In summary, as I have written, I felt some kind of gap between the gymnast's concentration and the people's attitude. Gymnasts performed so well but spectators were not synchronised to this. Including the ticketing problem, the first Olympic Game experience was quite odd for me in different aspects.

Posted by Takayuki Murakami at 07:47