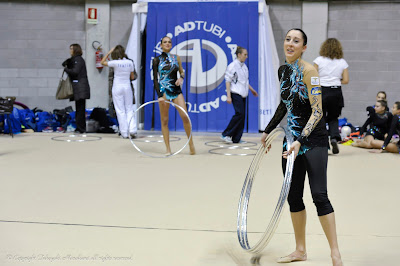 I arrived at Italy with a bit of apprehension for my left leg. Actually, it is no problem to walk normally but sometimes it was hard for me to carry a big and heavy suitcase with me at stairs. About 18kg, my suitcase weighs. Couldn't help taking it slowly and step by step.

Anyway, flight from Tokyo to Milano via Copenhagen was about 15hours, which was not too bad. My return ticket cost not too expensive neither. In fact, I should have been able to buy it much cheaper than I actually purchased. After arriving at Milano and stay one night, I got to Chieti, where a competition takes place with Ryanair. In order to keep Ryanair's regulation, I have chosen my camera-bag which is suitable for their regulation but is middle size. I wanted buy biggest one since obviously it has much more capacity therefore this was a compromise. But, thanks to this decision, I successfully passed through the boarding. Some people were detected by a officer, and then they had paid extra money for their luggage.

The flight from Milano to Chieti was for about an hour, which is short. And then as soon as I arrived, Enrico Della Valle and his daughter welcomed my arrival. Because before I decided to come to Italy, I firstly have consulted with Enrico about my photographing of Seria A despite I have never ever met him before. And then what he suggested was that he picks me up at the airport and recommended to stay at a hotel near to his home, and then go to the venue with him by his car. This was absolutely fantastic suggestion and I had no reason to decline.
As he suggested, I could spent my time quite fruitfully. He invited me to come his home to have dinner, and then we had a conversation about picture making, which was very useful. This sort of talk hardly happens because photographers who take rhythmic gymnastics are very few and even if you know some photographers who have same interest, you cannot have enough time to do this.

Next day, I went to the competition to cover it along with Enrico. I was a bit nervous since this was the second time for me to photograph as a press since I have done at Minsk last July. At this time, I was able to photograph both gymnast's training and competition. For me, training is much interesting because obviously if you are just a spectator, you can't watch the training. In other words, photographing training sessions is a sort of privilege for the press.

However, it was difficult for me to take pictures at the training area since there were loads of gymnasts training in a small space and also were tiny spaces for photographers. But gradually I noticed that I was able to get inside of the carpet, which means I don't necessarily keep staying outside of the boundary. And then finally I accustomed.
During the competition, I was keep shooting the competition from various angles. Yes this was first attempt of three. It's not too bad to try things differently.
Actually, the training session began early in the morning and the competition ends at 10PM or something. Therefore it was literally long day. But, I finally reunited a friend who is from Italy and also I came across at the London Olympics final day Wembly Arena. His daughter is a member of Italian national team of group, and then I got to know her for the first time after this competition at Chieti. Yes, she is Elisa Blanchi.

Next day, I was supposed to go to Elisa's home since they are living in Roma, where is to the west from Chieti. I got on a car with Elisa and her father and went to Roma. This was long drive. I was tired but not able to sleep in the car and then Elisa and her father were chatting during the drive all the time. Of course they were talking in Italian and then I couldn't understand at all but I admired the duration of their conversation. And after five hours or so, I reached to her family's home. And my stay in Roma has begun.


I respect all the athletes. Therefore I have got lots of question about them. Staying Elisa's home enables me to do this. One day, I had a dinner at her home with her family. I drunk two bottle of beer (Peroni of course) and got drunk to some extent. And then I interviewed her something about her life as an athlete.

T: Is your hair natural? I mean your waved hair.
E: Yes, it is as well as my father.

T: I thought your hands are very big. Don't you think so?
E: Not really. (And I compared my hand with hers, and then mine was slightly bigger. But her height is taller than I.)

T: Do you drink?
E: Yes, sometimes but a little though.

T: Which Olympics was most impressive for you?
E: London because it is the latest. Beijing was not really due to our result.

T: Do you get nervous before you perform.
E: Not really. I get excited rather than nervous. My adrenaline pumps.

T: How do you get used to perform at the competitions surrounded by lots of spectators?
E: You have to get used to the situation by numbers of performances. These experiences make you stronger.

T: Of course techniques are very important but I suppose that mental is significant as well. Do you agree?
E: Yes (with nodding a lot).

T: Have you ever been injured badly in your career?
E: Yes, on my knee. It took two months to be recovered. But now it's fine.

T: What are your family for you?
E: Family is important. (She seemed to me quite difficult to explain in English.)

T: What did make you keep performing for more than 20 years?
E: Passion and love towards rhythmic gymnastics.

T: Have you ever thought about retirement apart from now after finishing London?
E: No, never.

T: So, now why did you decided to leave from rhythmic?
E: I think I've done enough.

T: No regrets? Or no hesitations? How do you feel at the moment?
E: No, no. It was difficult to make sure but it's over. I am very calm at the moment.

T: What is your favourite colour?
E: Blue.

T: Anything else?
E: And green.

The questions I asked her above are almost everything which I can remember. I think I should have questioned more but, as I cannot speak Italian properly, this made me keep asking clumsy and awkward. In addition, I am always silent without alcohol. It was my best performance when I got drunk at the dinner.
Even though there were chances to question her, for me it was quite a special opportunity and I was so gｌad to talk with Elisa. She is absolutely lovely. Yes, love Elisa.

At last, for me the most remarkable answer was that she never ever thought about retirement until she decided to retire after London 2012. Since I don't have this sort of sense. No such a experience ever in my life. Therefore what I thought was that in order to keep on doing something, the thing should be what you like (or love). Otherwise it's absolutely easy to give up. You have to wish strongly, not loosely. At the same time, I suspect myself if photography is the one for me.
Posted by Takayuki Murakami at 23:14 No comments: